Would you like to switch to the accessible version of this site?

Don't need the accessible version of this site?

What is eyelid margin disease?

Eyelid margin disease is a common and persis­tent inflammation of the eyelids. This condition frequently occurs in people who have a tendency toward oily skin, dandruff or dry eyes. With blepharitis, both the upper and lower eyelids become coated with oily particles and bacteria near the base of the eyelashes .. What are the symptoms of eyelid margin disease? 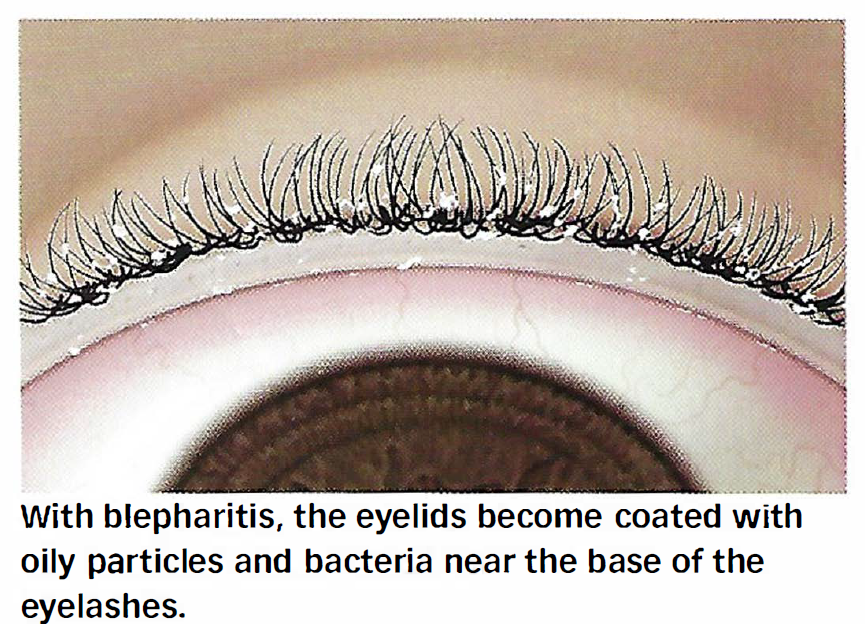 What causes blepharitis? Everyone has bacteria on the surface of their skin, but in some people, bacteria thrive in the skin at the base of the eyelashes. Large amounts of bacteria around the eyelashes can cause dandruff-like scales and particles to form along the lashes and eyelid margins. Blepharitis is also associated with meibomianitis - a dysfunction and inflam­mation of the nearby oil glands of the eyelids (called meibomian glands). How is blepharitis treated? Blepharitis is often a chronic condition but it can be controlled with the following treatment: warm compresses. wet a clean washcloth with warm water, wring it out and place it over your closed eyelids for at least one minute. Repeat two or three times, rewetting the washcloth as it cools. This will loosen scales and debris around your eyelashes. It also helps dilute oil secretions from nearby oil glands, preventing the development of a chalazion (pronounced kuh-LAY-zee-un) - an enlarged lump caused by clogged oil secretions inthe eyelid.

What is a stye?

A stye - also called a hordeolum (pronounced hor-dee-OH-lum) - often appears as a red, sore lump near the edge of the eyelid. It is usually caused by a bacterial infection. A stye will develop at the base of an eyelash if the eyelash follicle (root) is infected. This is usually called an external hordeolum.

A stye will also develop if there is an infection in one of the tiny lubricating oil glands (called meibomian glands) inside or under the eyelid. When this occurs, it is usually called an internal hordeolum. A stye can also be caused by widespread inflammation (swelling) of the eyelid from blepharitis, a condition that affects the eyelid margins. 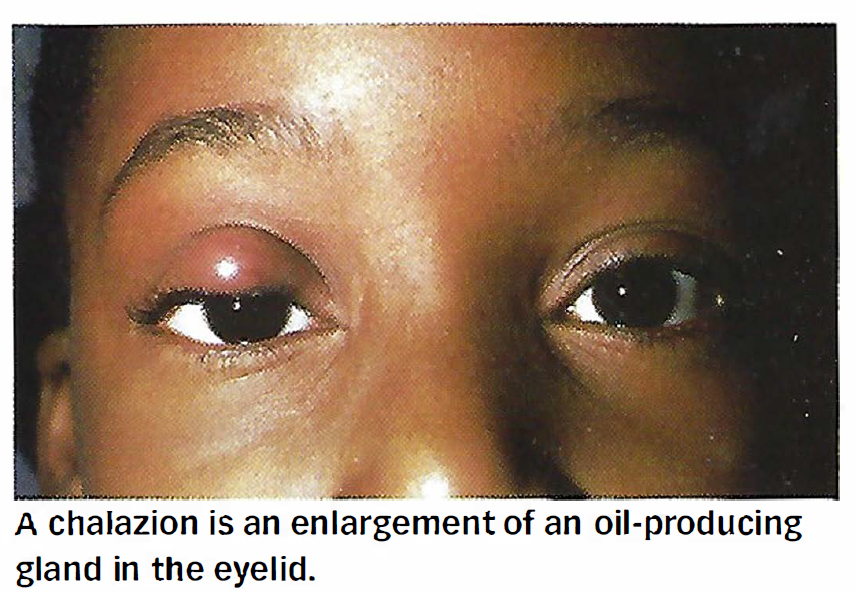 What is a chalazion? A chalazion (pronounced kuh-LAY-zee-un) is an enlargement of an oil-producing gland in the eyelid called the meibomian gland. It forms

when the gland opening becomes clogged with oil secretions. It is not caused by an infection from bacteria, and it is not cancerous. If an internal hordeolum doesn't drain and heal, it can turn into a chalazion. Unlike a stye, a chalazion is usually painless. What is the difference between a chalazion and a stye? A chalazion is sometimes confused with a stye, which also appears as a lump on the eyelid. A stye is a red, sore lump near the edge of the eyelid caused by an infected eyelash follicle. Chalazia tend to develop farther from the edge of the eyelid than styes. In some situations it may be difficult to distinguish between a chalazion and stye.

What are the symptoms of stye and chalazion?

Send Us an Email

Find us on the map